"We had an engineer, doctors and people who’d done biomedicine and pharmacy [doing the Doctor of Dental Surgery]. Everyone had different backgrounds and we learned from each other and learned how to think about the same problem in different ways." 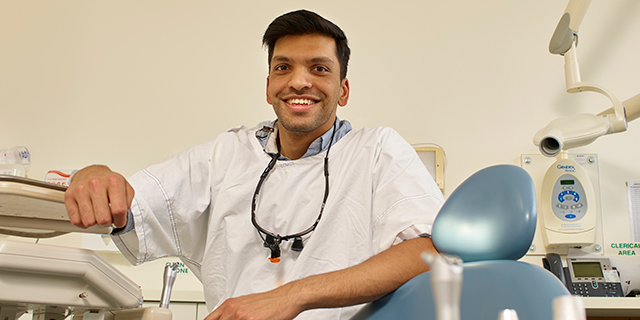 When a cricket ball struck Aditya and chipped his tooth, it was the start of a long and winding road towards a career in dentistry in Shepparton.

Aditya was born in India and migrated to New Zealand when he was ten. After high school, he studied pharmacy and spent a year as a pharmacist in Christchurch but the role was 'more retail and less clinical' than he had hoped.

"I wanted more contact with patients so I could help them make decisions about their health and I remembered that while I was studying pharmacy, I had a knock to my tooth during an indoor cricket match. A housemate was studying dentistry and noticed when my tooth became discoloured. She helped me get the right treatment and it struck me that dentistry could be more hands-on," says Aditya, 28.

He chose the Doctor of Dental Surgery at the University of Melbourne because it was a four-year postgraduate course.

"I felt my classmates would be in a similar boat to me and have already studied different fields and I was right. We had an engineer, doctors and people who’d done biomedicine and pharmacy. Everyone had different backgrounds and we learned from each other and learned how to think about the same problem in different ways," says Aditya.

After qualifying as a dentist, Aditya settled in Shepparton and is based at Goulburn Valley Hospital. He spent a month in the town’s hospital during his final year of study and says it was 'the best experience of the course'.

"I saw a lot of complicated cases and had a lot of independence in working with patients. There were a lot of extractions and fillings and patients arriving in pain and we had to do the initial phase of a root canal to stop that pain," he says.

"I don’t think you necessarily get that breadth of experience working in Melbourne. There are not as many specialists in rural towns so as a general dentist you’re expected to treat those cases."

Aditya also works with the dental vans that travel to areas such as Rochester, Violet Town and Maroopna to deliver services to aged care facilities. And he’s involved with the telehealth program that links specialists in Melbourne’s dental hospitals with rural and regional dentists.

"If we have difficult cases, instead of referring patients to Melbourne that can involve costs and travel time for them, we arrange a telehealth consultation here. The specialists advise us so we can provide appropriate dental services in Shepparton if possible," says Aditya.

Aditya supervises University of Melbourne dental students taking part in the rural rotation program and enjoys being a local. He’s a regular at the gym and plays indoor soccer and netball.

"Shepparton is small enough that everyone knows everyone. It does have a small town feel and I’m happy to be part of that," he says.

Find out more about the Doctor of Dental Surgery