The roles of intranuclear viral protein interactions in disease

Although they have entirely cytoplasmic life cycles, many RNA viruses, including rabies/Australian lyssavirus, Nipah/Hendra and Ebola, express proteins that exploit cellular transport pathways to access the nucleus of host cells.

Using cell imaging (Figure 1), in vitro interaction assays, and reverse genetics/animal disease models, we found that many viral proteins use novel, highly regulated nuclear trafficking mechanisms that are critical to pathogenicity. To understand the nuclear functions of the viral proteins, we have used proteomics, super-resolution imaging approaches, and viral infection assays to identify a number of novel interactions with intranuclear compartments and nuclear proteins. Current projects aim to define the function of these interactions, their importance to disease, and their potential as new targets for the development of therapeutics and vaccines. 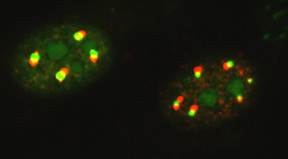 For further information about this research, please contact the research group leader.