Melbourne researchers are working towards a potential treatment to slow the progression of motor neuron disease (MND), offering hope to people with this debilitating and incurable illness. 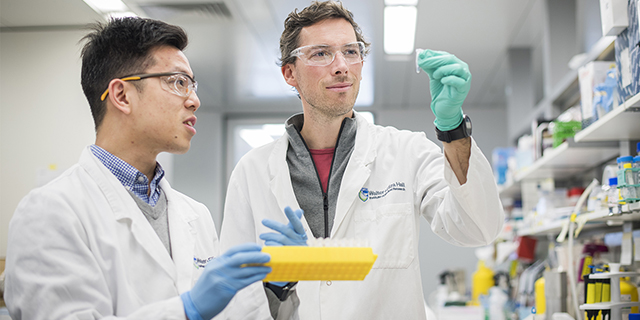 The research team has uncovered how inflammation in MND is triggered. Pinpointing the molecules involved in this pathway could be a first step towards a new treatment for MND.

The discovery, published today in Cell, was led by Walter and Eliza Hall Institute researchers, Associate Professor Seth Masters and Dr Alan Yu, who hold honorary positions with the University of Melbourne, with colleagues from the University and Hudson Institute.

The researchers found that by blocking an immune sensor called STING, they could dramatically prevent inflammation from MND patient cells, paving the way for a new class of drugs to be developed for people with neurodegenerative disorders, such as MND.

MND is an incurable condition in which the nerve cells controlling the muscles that enable people to move, speak, swallow and breathe, fail to work. One in 10,000 Australians will be diagnosed with MND and the average life expectancy from diagnosis is just two years.

Most people suffering from MND have an accumulation of a protein called TDP-43 within cells of the central nervous system. This build-up is associated with an inflammatory response that precedes major symptoms.

Researchers investigated how the disease-causing inflammation is triggered in MND.

“This unexpectedly identified that an immune sensor called STING is activated downstream of TDP-43. Fortuitously, our team had already studied the role of STING in other inflammatory diseases and are now working out how to block it,” Associate Professor Masters said.

The team then used new inhibitors – drug-like compounds – to block different components of this inflammatory pathway.

“Using cells from patients with MND that we can turn into motor neurons in a dish, we showed that blocking STING dramatically prevented inflammation and kept the cells alive longer,” Associate Professor Masters said.

“This is an exciting first step before taking these inhibitors into the clinic for treatment for MND.”

The research also established activation of STING in people who had passed away due to MND.

“We are now aiming to validate a biomarker of the pathway earlier in the disease progression,” Associate Professor Masters said.

“Once this neuroinflammatory biomarker is validated, we will better understand which patients will benefit the most from treatments targeting the pathway.

“With this knowledge, there is the potential to develop a treatment for patients with MND. Interestingly, our preclinical models suggest that although the anti-inflammatory drugs that inhibit STING did not prevent disease onset, they did slow the degenerative progression of disease.”

“We are hopeful this research could lead to a treatment for people with established MND, who currently have very few treatment options and a life expectancy post diagnosis of just two to five years,” he said.

“While it isn’t a cure, we hope it might extend life expectancy and dramatically improve the quality of life for people diagnosed with MND.”

Associate Professor Masters said a future treatment might also be effective in slowing the progression of other neurodegenerative disorders.

“We are hoping to develop a new class of drugs that would act as STING inhibitors to stop the progression of neurodegenerative disorders, such as MND, Frontotemporal Dementia and Parkinson’s disease,” he said.

Co-author Associate Professor Peter Crouch from the University of Melbourne’s School of Biomedical Science is enthused by the world-class MND research arising from collaborations across Melbourne.

“MND is an insidious disease.  If we’re going to develop effective, disease-modifying therapies, we need to know in detail the cellular events that cause the debilitating symptoms and rapid fatality. This work sheds important new light on the disease because it demonstrates how some previously established features of the disease are connected at the molecular level.  It has major implications for new therapy development.,” Associate Professor Crouch said.