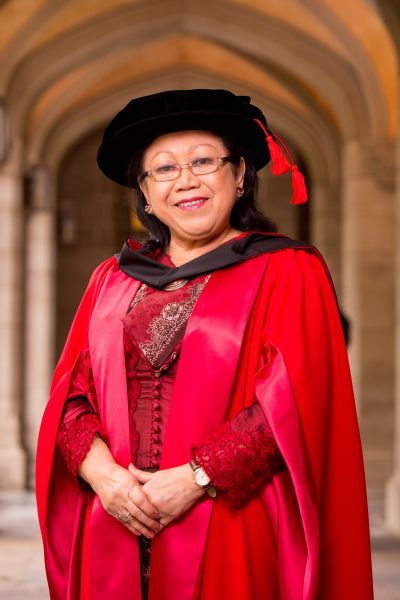 Professor Yati Soenarto has been called the mother of modern paediatrics in Indonesia. Since graduating in Medicine from Universitas Gadjah Mada (UGM) Indonesia, she has pursued a quest to improve the health of the nation’s children and build paediatric capacity in the country’s medical workforce. Her post- graduate training has spanned Indonesia; Vriye Universiteit, Amsterdam; The Royal Children’s Hospital, Melbourne; University of Toronto; and Harvard Medical School, Boston. She has been Professor of Paediatrics at UGM in Yogyakarta since 2007.

Significant improvements in Indonesian public and paediatric health have been made through Yati Soenarto’s establishment of the Paediatric Research Office, chairing the Centre for Clinical Epidemiology and Biostatistics at UGM, and through the generations of Indonesian paediatricians she has taught and mentored for over four decades.

Yati Soenarto’s longstanding relationship with the University of Melbourne began over 40 years ago, collaborating on rotavirus and diarrhoea disease management research with Professor Ruth Bishop AO and Professor Graeme Barnes. Her collaboration now extends across a range of child health research activities involving the Centre for International Child Health and the Royal Children’s Hospital. An important element has been the development of a strong bond based on mutual respect across the institutions. A regular exchange of promising students, young doctors and researchers has occurred including a significant number of PhD and Masters students at Melbourne. She recently led a delegation to the University of Melbourne with the aim of further developing the medical curriculum at Gadja Mada.

Her work with Professors Bishop and Barnes led to the identification of rotavirus as the chief cause of severe diarrhoea throughout the developing world. She has since gone on to introduce a program of oral rehydration for diarrhoeal disease in Indonesia that is being used as a model in developing countries worldwide, and is chief investigator in a multi-partner clinical, academic and corporate collaboration aimed at manufacturing the rotavirus vaccine in Indonesia. With numerous publications in peer-reviewed journals she has made important contributions in the areas of epidemiology and translational research into common childhood diseases. She has conducted investigations into zinc therapy for diarrhoea, led the development of policy on Diarrheal Disease Control and Integrated Management of Childhood Illness (IMCI) for introduction in the curriculum of Indonesian medical schools, and led Dengue and Tuberculosis studies in Yogyakarta in the early 1980s.

Yati Soenarto has been actively involved in the field of Bioethics and Humanities since the mid-1990s when she studied at Harvard Medical School as a Freeman fellow under the supervision of Professors Mary Jo Good and Byron Good. She is co-author of a joint study on end of life.

Yati Soenarto has made valuable contributions to the work of a wide range of boards, committees and organisations the world over but most particularly throughout Indonesia and Asia. Her expertise is sought frequently for presentations at conferences and symposia.

Recognition of Yati Soenarto’s leadership in paediatrics includes the Achmad Bakrie Award, the Outstanding Asian Paediatrician Award and the R Sutedjo Award. Her contributions to the development of paediatrics in Indonesia and the advancement of public paediatric health will benefit generations of children, their families, communities and nations.