Citation for the Doctor of Science (honoris causa) 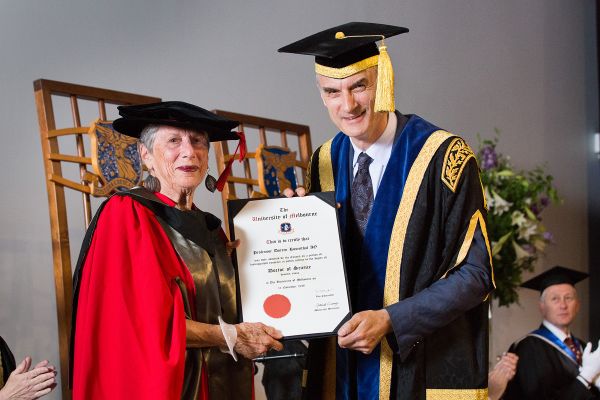 Professor Doreen Rosenthal has been a leading figure in the scientific investigation of human development from childhood to old age, and in the application of behavioural research to promoting sexual health.

After commencing her Bachelor of Arts with Honours in Psychology at the University of Melbourne as a young mother with three small children, Doreen Rosenthal graduated at the top of her class. She then completed a PhD at the University, then commenced a lectureship in psychology at Melbourne State College before rising rapidly to become Reader in developmental psychology at the University of Melbourne. In 1992 she became Professor and Founding Director of the Australian Research Centre in Sex, Health and Society at La Trobe University, followed by a term as Associate Dean (Research) in that university’s Faculty of Health Sciences. In 2003 she returned to the University of Melbourne as Professor of Women’s Health and Director of Key Centre for Women’s Health in Society. Since 2008 she has been Professor Emerita, Melbourne School of Population and Global Health.
In these roles Doreen Rosenthal’s intellectual, organisational and moral leadership has been nationally and internationally influential

in the study of adolescence, sexually transmitted disease, and development across the life span. She has a global reputation in the study of HIV prevention, adolescent sexuality, women’s health and the importance of culture in human development.

As a scientist, Doreen Rosenthal is best known for her pioneering studies of adolescent risk-taking, ethnic identity, and family communication. Her many research projects are notable for being conducted in diverse cultural settings, with people of varied ages and social backgrounds, and for paying close attention to the intimate details of subjective experience. Her research has served as a foundation for effective interventions against sexually transmitted infections, injecting drug use and postnatal depression, and for promoting the well-being of international students. Two award-winning websites are among the fruits of her scientific work.

Doreen Rosenthal has produced more than 200 scientific publications, which include many highly cited contributions. She has attracted about $15 million in grant funding from Australian, US and Swiss agencies. In addition to her prolific output of scientific articles, she has written or edited eleven books, including accessible volumes on youth and sexuality, homelessness, and grandparenting. She continues to write extensively on the psychology of retirement and on research ethics.

She is on the Scientific Advisory Board of the Center for HIV Identification Prevention & Treatment Services at the University of California, Los Angeles, and has served on numerous government committees and scientific advisory boards, journal editorial boards, and on the Council of Janet Clarke Hall at the University of Melbourne. Her honours include Officer of the Order of Australia (2003), Fellowship of the Academy of the Social Sciences in Australia and listing on the Victorian Honour Roll of Women.

Professor Doreen Rosenthal is recommended for the award of Doctor of Science (honoris causa) for her distinguished contributions to scientific knowledge on human development and to the promotion of health and well-being in marginalised populations.