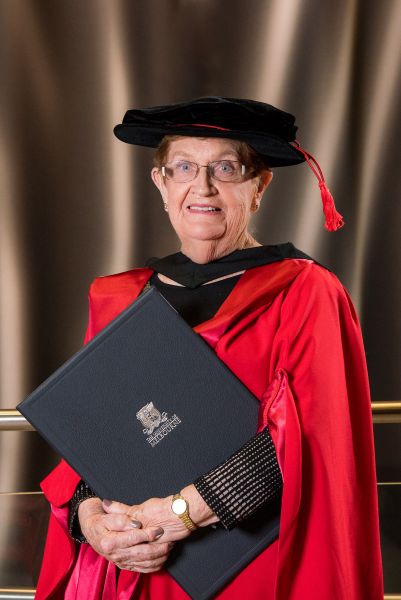 When Margaret Garson graduated from medical school in 1951, the professional barriers for women ambitious enough to contemplate specialist training were significant.  Embarking upon clinical specialist training was particularly hard so, when she was denied entry to training in obstetrics, Margaret decided to specialise in haematology and pathology.

A decade later, having finished her haematology training, Margaret travelled to Texas, USA with her young family and husband, who was on a scholarship to study plastic surgery, with an accompanying spouse visa that did not enable her to work. With the generous assistance of her husband’s boss’s wife, Margaret obtained a research fellowship with the University of Texas Medical Branch, a National Institutes of Health grant, a working visa and childcare.

Her arrival in Texas followed the University of Pennsylvania School of Medicine discovery of the Philadelphia Chromosome – the identification of a translocation between two human chromosomes that resulted in an oncogenic fusion associated with a range of leukaemia – something the director of her research unit was keen to discover more about. Margaret was sent to the Rockefeller Institute in New York to learn the techniques needed for chromosomal research. Fascinated by this emerging field she immersed herself in the literature and, setting out to learn all she could, developed an expertise in cytogenetics.

On her return to Melbourne four years later, Professor of Medicine at St Vincent’s Hospital in Melbourne, Carl de Gruchy, asked Margaret to help establish a cytogenetics laboratory at the hospital. Over subsequent decades, with the love and encouragement of her husband, she led the development of a centre of cytogenetics and trained generations of cytogeneticists and haematologists at the hospital. Eventually becoming the Victorian Cancer Cytogenetics Centre, the laboratory developed a statewide expertise and a leadership role in the field. To this day the Centre continues to conduct important research and plays a critical role in the diagnosis and treatment of haematological and other cancers across Victoria.

Margaret’s early entry into, and leadership of, the development of cytogenetics in Victoria enabled cancer patients across the state to benefit from techniques that have improved the diagnosis of their disease, the development of a prognosis and have been used to monitor disease remission or relapse. Equally, her dedication to training successive generations of specialists produced a community of expertise and a diaspora of cytogeneticists and haematologists across the world. Margaret’s award of Officer of the Order of Australia was made in recognition of her distinguished service to medical research and to education – the two streams that feed the pool of clinical practice.

Margaret Garson’s contributions to medicine, as a role model for women in research, through her leadership in the establishment of cytogenetics as a new field of medical research in Victoria and as a mentor and teacher to generations of medical scientists have been fundamental to the development of cancer treatment services in Victoria.