Citation for the Award of the Doctor of Laws (Honoris Causa) 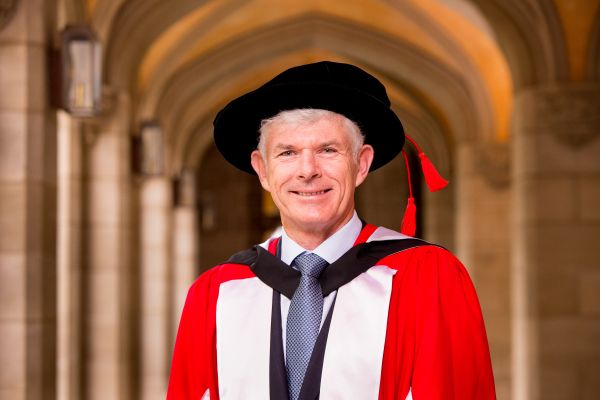 In an increasingly globalised world, the capacity of doctors to improve the lives of their patients, of governments to protect the well-being of their citizens, and of individuals to maintain their own health is inextricably connected to the variety and quality of the biopharmaceutical products they can access. The work of Brian McNamee, in particular over his 23 years at the helm of CSL Limited, has expanded and improved the range of such products across the world and established Melbourne, Australia, as a leading international centre of biomedical research and manufacturing expertise.

Shortly after graduating from the Melbourne Medical School, Brian McNamee turned his attention to the world of commercial medicines – first in Germany, then back in Australia working for Faulding, and then the start-up Pacific Biotechnology Limited. With ten years’ experience, aged 33, he was headhunted by Industry Minister, John Button, to run the Commonwealth Serum Laboratories, a small government owned company mostly engaged in making flu vaccines and antibiotics for local markets, and with an exclusive contract for the processing of plasma products in Australia.

When Brian McNamee took over the company it had less than one per cent of the global plasma market and was valued at $23 million – not much more than the land it occupied. Over his first four years at CSL Brian McNamee brought the company to the stage where it could be privatised and listed with a valuation of $299 million. On his retirement from CSL, the company was bringing in $5.4 billion in revenue, was valued at $28.5 billion, had over 25 per cent of the global market, and employed over 11,000 staff in more than 27 countries – over 1000 of them working in research and development. The company’s research and development investment grew from $10 million in 1991 to over $430 million annually.

The success of CSL Limited under the stewardship of Brian McNamee was due in no small part to his exemplary strategic and collaborative leadership. Under his direction CSL Limited developed a calculated program of international acquisition and divestment of assets that provided the company with entry to international markets and enhanced its capacity to expand its product range. The strong clarity of purpose that permeated the corporate culture of CSL under Brian McNamee’s leadership was closely linked to the company’s fundamental pride in the real value of its products to society. Its wide range of products include vaccines, anti-venom, antibiotics, immunoglobulin, coagulants, sera, and growth factors that are used the world over in treatments for an equally wide range of conditions such as envenomation, bleeding disorders, immune deficiency and autoimmune disorders, trauma, sepsis and burns, in the prevention of infectious disease, in surgical procedures, and in research and diagnostic laboratories.

Throughout this huge program of development and growth, the heart of CSL has remained in Australia, its headquarters Parkville, Victoria. Brian McNamee’s leadership of CSL and influence in the development of pharmaceutical industry policy has had an enormously beneficial impact on the corporate and scientific vigour of Australia; an impact worth celebrating and emulating as our nation looks to expand cultivation of its knowledge and discovery based industries.

Brian McNamee’s successful transformation of CSL, and with it the biotechnology industry in Australia, contains a lesson for leaders who would compete on the world stage. A lesson to focus on quality and support innovation, to build strategic alliances that benefit multiple parties, to care deeply about a central purpose and to believe in the possibilities the future holds.