Will the new global goals do it for women 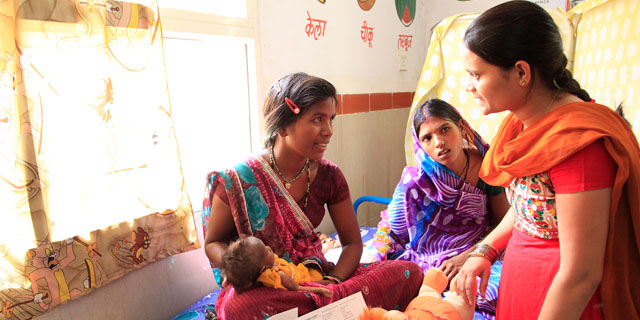 It is a truth universally acknowledged that every pregnant woman hopes to deliver a healthy baby.

In the event that this is not the case – when mother, baby or both die – it is a tragedy.

Between 2013 and 2014, ten stillborn and newborn deaths in a single Victorian hospital stirred an investigation into the quality and delivery of care and led to the sacking of the hospital board and head of obstetrics.

Australia is a lucky country with a very low maternal and newborn mortality rate (6 deaths in 100,000 live births), and the tragedy of these infant deaths resonated into our homes. After all, it shouldn’t happen here.

But it shouldn’t happen anywhere.

Annually, hundreds of thousands of women and their babies die from complications during pregnancy or childbirth.

Maternal and newborn deaths fell by 43 per cent between 1990 and 2015 – considerably less than the targets pledged by UN member states in 2000 as part of the Millennium Development Goals (MDGs).

At the turn of the century, eight MDGs were created to address inequality across health, economics and education for low to middle income countries. Goals 4 and 5 were tasked with reducing child mortality by two-thirds and maternal mortality rates by 75 per cent.

While there were large gains for some countries in reducing these deaths, others made little or no progress.

In September 2015, the United Nations announced the transition from the eight MDGs to 17 Sustainable Development Goals (SDGs). These new goals are intended to combine efforts to tackle the world’s biggest problems: sustainable development of economic, social and environment dimensions to improve the health of the planet and its people. No mean feat.

Robin Gorna, Executive Director of the Partnership for Maternal, Newborn and Child Health – an alliance of organisations committed to improving the health of women, newborn and children through education, advocacy and accountability – says health and equity are now underlying themes that sit across all the goals rather than carving out a health specific target.

“What is exciting about the SDG agenda is that it can focus health wherever it is needed so we don’t leave anyone behind,” she says.

It means we hold human rights at the heart of our response.

We are not focusing on a country’s economic status, but health as a whole to address health issues with equity.

So if health is considered an underlying feature of all the goals, why address maternal and newborn health as a particular topic for concern?

There is little dispute that access to an effective health system, nutrition and education significantly reduces the risk of death for both mother and baby.

One of the targets of the SDGs, is to reduce the global maternal mortality rate (MMR) to less than 70 per 100,000 live births.

To put that in perspective, according to WHO, many European nations have an MMR of 3; China has an MMR of 27; and Sierra Leone has an MMR of 1360. The average rate in developing countries is 239 per 100,000 births.

Addressing the underlying determinants of inequity is a key to reducing these deaths and achieving the SDGs.

Though still low, Aboriginal and Torres Strait Islanders have a maternal mortality rate of more than double that of non-Indigenous Australians, according to a 2015 report by the Australian Institute of Health and Welfare.

Perhaps not coincidentally, Aboriginal and Torres Strait Islander adults were also more than three times as likely to have diabetes.

The increasing rates of obesity and diabetes are coinciding with a slight rise in maternal mortality rates in high income countries.

According to Professor Barbara McPake, Director of the Nossal Institute, something appears to be acting to reverse the generational gains in maternal health even in high income countries.

“Chronic ill health, particularly obesity and cardiovascular disease, and a lack of access to care and possible variable quality of care, are important elements of the picture,” says Professor McPake.

And if a wealthy country like Australia is struggling to address the impacts of chronic ill health, what about poorer nations?

Walking Together: The experience of traditional and skilled birth attendants in rural Kenya from Mighty Films on Vimeo.

Professor Mola from the University of Papua New Guinea agrees, and when recently in Melbourne to present at the annual Nossal Institute Forum, said:

The two process indicators that relate to the chance of dying with your baby is whether you have a supervised skilled birth attendant and how many babies you have.

“It’s the public health parameter which is the most disparate between rich countries and poor countries,” says Professor Mola.

“The problem of disrespect and abuse of women during pregnancy remains one of the major barriers to better uptake of skilled birth attendants in health facilities,” says Associate Professor Kermode.

“Responding to this problem is important, not only because it deters women from seeking care, but because it erodes trust in the health system more broadly.”

Disrespect and abuse towards women in health care settings – staff and patients – is not exclusive to low income countries. A number of female doctors and trainees across Australian and New Zealand reported harassment and abuse tired of the assumed role they played in a “toxic culture”.

The stillbirth tragedy in Victoria followed a similar pattern. The midwives and nurses who raised concern about patients’ status were ignored by doctors and discouraged from providing their opinion.

Associate Professor Kermode’s work was the basis of the film, Walking Together, funded by the Nossal Institute through an Australian Development Research Award (ADRA).

Addressing underlying attitudes on gender is at the heart of tackling gender inequality. But there is hope that the SDGs will make a difference for women.

There is a dedicated SDG to achieving gender equality and empowering women and girls with targets to end all forms of discrimination and violence against women and girls, and achieve gender equality through universal access to sexual and reproductive health, education, and equal opportunities in the workplace.

The Nossal Institute has a dedicated research group addressing maternal and child health and gender equity respectively. Their current projects are looking into improving access and quality of care to under-serviced populations in many countries of South and South East Asia, The Philippines in the Pacific, and Kenya and Ethiopia in East Africa; and strengthening health systems so they are able to better respond to increasing demands.

Achieving the targets stipulated in the global goals, health systems must include addressing inequities in access and quality of care, and be responses enough to deal with new health challenges.

For SDGs that is the real challenge.

This article was first published on Pursuit. Read the original article.