New research from The Peter Doherty Institute for Infection and Immunity published in Nature today has revealed surprising differences in how each of the four types of influenza that cause seasonal viruses is spread. 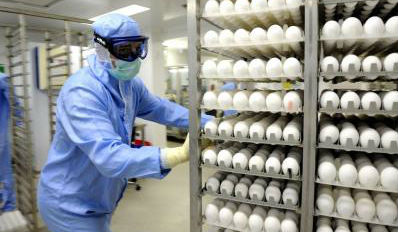 New research from The Peter Doherty Institute for Infection and Immunity published in Nature today has revealed surprising differences in how each of the four types of influenza that cause seasonal viruses is spread.

Researchers from the World Health Organisation (WHO) Collaborating Centre for Reference and Research on Influenza, Royal Melbourne Hospital and the Department of Microbiology and Immunology (DMI), The University of Melbourne at the Doherty Institute, together with the University of Cambridge and the Fred Hutchison Cancer Research Center showed that the rate at which each virus evolves is important for determining which flu virus is in circulation.

All four influenza viruses that cause seasonal flu in humans - influenza A viruses H3N2 and H1N1, and influenza B viruses Yamagata and Victoria - cause similar symptoms and evolve by similar mechanisms.

Previous research conducted by the University of Cambridge showed that H3N2 viruses circulate continuously in East and Southeast Asia throughout the year, spreading to the rest of the world to cause seasonal flu epidemics. Given the fundamental similarities between H3N2, H1N1 and B viruses it was thought that H1N1 and B viruses would also emerge from East and Southeast Asia to cause yearly epidemics worldwide.

However, the work published today in Nature shows that while H3N2 viruses die out between epidemics and new viruses emerge from East and Southeast Asia every year, H1N1 and B viruses frequently circulate continuously between epidemics worldwide, which gives rise to a huge diversity in these viruses.

Doctor Ian Barr, Acting Director WHO Collaborating Centre for Reference and Research on Influenza (WHO CC) and co-author said, "This work represents another piece in the complex puzzle of influenza virus circulation and human infections and provides insights that will help develop better influenza vaccines that match strains circulating in the community.

"In summary, while the spread of influenza in Asia is a good indication of which H3N2 virus might spread worldwide, it's only part of the solution."

The key element to global movement is who is getting infected: faster evolving viruses, like H3N2, can infect adults who tend to travel more frequently than children, providing more opportunities for the virus to spread. Conversely, more slowly evolving viruses, such as H1N1 and B viruses, primarily infect children. Children get sick with all four seasonal flu viruses, but H3N2 evolves faster so it infects adults more often. This leads to a greater proportion of adult infections with H3N2 relative to H1N1 and B viruses, and faster spread of H3N2 viruses.

"The ultimate goal is to create a one-shot flu vaccine that will provide immunity against all strains, replacing the need for a yearly vaccination. The research outlined in Nature provides us with more evidence and information to help us achieve this goal.

"The WHO CC at the Doherty Institute is one of only five such Centres in the world and plays a vital role in analysing influenza viruses in circulation across the globe, which is then used by the WHO to determine the strains to be included in the annual seasonal vaccination."

The research was primarily funded by the Royal Society and US National Institutes of Health with extensive involvement of the WHO's Global Influenza Surveillance and Response System.