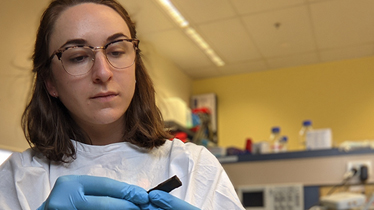 University of Melbourne and Bionics Institute PhD student Elise Ajay has won a national competition with a video pitch on her research into improving the cochlear implant.

Attracting 50 entries from universities across Australia, the Pitch It Clever competition challenges young researchers to create a short video pitch explaining why their research matters.

Ms Ajay said she was thrilled to win the prize of $3000, presented by Universities Australia on 2 June 2021.

“My video explains how people using cochlear implants currently have trouble hearing music, because the device was originally designed for hearing speech.

“The aim of my PhD research is to find ways to use a combination of light and electricity to improve the quality of sound heard via cochlear implants,” she said.

Ms Ajay has been a student at the University of Melbourne since 2020 and will be undertaking two more years of research at the Bionics Institute to complete her PhD.

University of Melbourne Vice-Chancellor Duncan Maskell said: “The ability of researchers to explain their research so that it can be easily understood is an underrated skill.

“I am delighted that Elise’s clear explanation on the future of bionic hearing has been recognised by Universities Australia and I congratulate Elise on her award.”

The cochlear implant has helped over 700,000 people with hearing impairment worldwide since it was first invented at the Bionics Institute by University of Melbourne Professor Graeme Clark.

Bionics Institute CEO Robert Klupacs said: “We’re very proud of Elise who is a great example of the high calibre of PhD students and researchers at the Bionics Institute.”

He said that combining excellence in research with the ability to communicate with members of the public is a skill encouraged at the institute.

“We focus on creating and improving medical devices that will change the lives of people living with conditions such as hearing loss, epilepsy, Parkinson’s disease, Crohn’s disease, stroke and diabetes.

“This research depends on people with these conditions being involved in clinical trials. Understanding the work of our researchers is a vital first step to encourage people to participate,” he concluded.

If you would like to take part in a clinical trial for a medical device at the Bionics Institute, go to: www.bionicsinstitute.org