Lest we forget – MDHS and ANZAC Day

The current COVID-19 pandemic is not the first time the University has faced a crisis that disrupted normal activities and operations. History shows us that the staff and students of MDHS have united together to meet numerous challenges over the years, contributing greatly to the health and wellbeing of the community in extreme circumstances. In fact, many landmark discoveries in clinical practice and research have been made during periods of stress and hardship.

Many fantastic examples of resilience and adaptability came from the Faculty’s response to the First World War. To celebrate and honour ANZAC Day, we are sharing just some of these inspiring stories with you.

In early August 1914, the Melbourne Medical School heard of the declaration of war. Dean of the School at the time, Harry Brookes Allen, was one of the first to begin planning for what he saw as the patriotic duty to support the home country in whatever way possible. He acted quickly to put the Faculty on a war footing, while at the same time persevering with setting up the Water and Eliza Hall Institute. 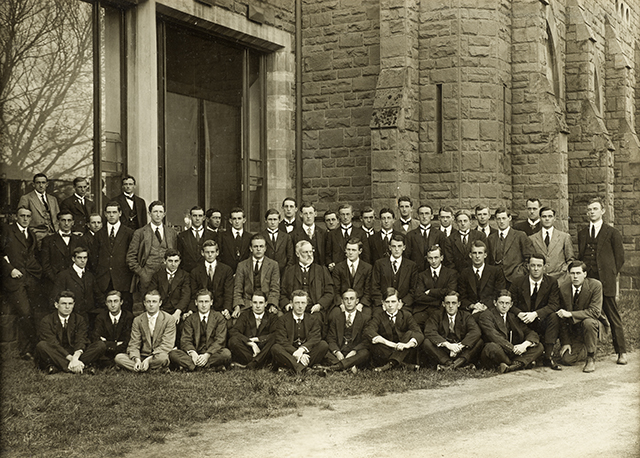 A group of fourth year medical students in 1915

In 1915, it became clear that encouraging students to enlist in the war would diminish the School’s ability to train medical professionals for the front, as well as for after the war was over. In response to this, Allen shortened the course and found replacements for the many medical staff who enlisted. After the Armistice, Allen accommodated a great increase in student numbers.

Stepping up and stepping in – student and alumni volunteers

There has always been a great tradition of our students and graduates volunteering to provide services in difficult times and under unprecedented conditions. Eric WB Woods (1892–1936) studied medicine at the University of Melbourne between 1911 and 1914, where he also became a renowned Australian Rules footballer. He had not yet finished his degree when, on 7 November 1914, he enlisted as a private solider in the First Australian Casualty Clearing Station (1ACCS). The 1ACCS landing party at Gallipoli consisted of five officers (all doctors) and 58 men. Orderlies and others with no clinical experience were trained by 1ACCS as an out-of-combat unit until ten days before the landing. Fifth year medical students in 1915. Eric WB Woods is in the back row, fourth from the right.

Woods left Gallipoli for Australia in June 1915 to complete his studies. After graduating, he re-enlisted and returned to Europe as a captain in the Australian Army Medical Corps and regimental medical officer in the 32nd Battalion, First Australian Imperial Force. He received the Military Cross at Polygon Wood in 1917, his citation reading:

For conspicuous gallantry and devotion to duty. For several days he worked at his aid post under very heavy shellfire, attending to all stretcher cases in the open with great courage and complete disregard of danger. His untiring organisation and energy saved many lives.

During World War I, the services of medical women were refused by the Army Medical Corps and Red Cross in both Australia and New Zealand. This did not deter Mary De Garis, the 31st woman to study medicine at the University of Melbourne, graduating in 1905. She paid her own way to travel to England to offer her medical skills to the war effort, along with 13 other Australian female doctors.

Unfortunately, at that time the Royal Army Medical Corps and the British Red Cross also refused to accept women, even though female nurses had worked successfully at the battlefront since the days of Florence Nightingale. Not to be thwarted, groups of women, many of them members of suffragist movements, became involved in voluntary medical services, mostly through organisations such as the Order of St John. 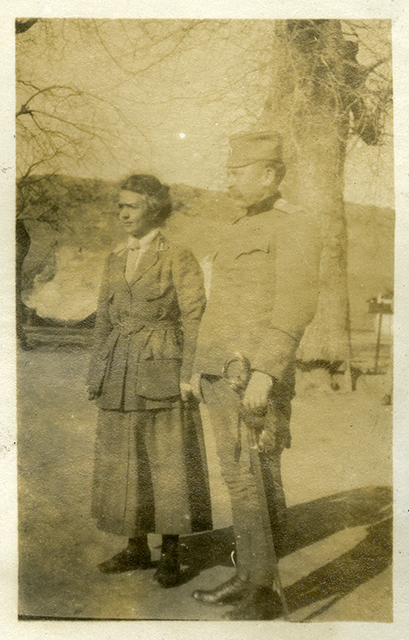 Three organisations were founded and run entirely by women, one of which was the Scottish Women’s Hospital, which became the largest British medical relief organisation after the Red Cross and St John’s, sending 14 medical units for foreign soil. The Serbian unit moved to Ostrovo on 1 September 1916, and it was there that Mary De Garis joined.

The unit worked near the Western Front, receiving many wounded soldiers from the Serbian army during its advance. Between September 1916 and October 1919, there were 1084 operations performed at Ostrovo, many by De Garis. In September 1917, she became Chief Medical Officer and Officer Commanding. Upon her departure, she was awarded the medal of the Order of St Sava, Third Class.

The University of Melbourne respirator – innovation in a time of crisis

The respirator was designed at the University by Thomas Howell Laby (Professor of Natural Philosophy) David Orme Masson (Professor of Chemistry) and William Alexander Osborne (Professor of Physiology).

News of gas attacks on the Western Front and of the first battles at Gallipoli were reported in the Melbourne media at the end of April 1915. Alarms were raised that gas would be used in the Dardanelles. Meanwhile, Professor Masson had chaired a meeting of University staff on 21 April, at which scientists pledged to offer their services to the government. 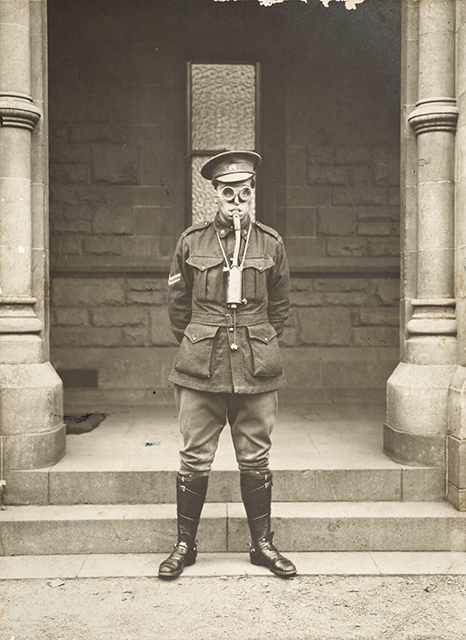 The professors then produced a report on asphyxiating gases and protective measures, proposing a mask consisting of a metal canister made from tobacco tins filled with soda lime (absorbent against chlorine and bromine), a breathing apparatus for inhaling filtered air and exhaling through a valve, a nose clip and motoring goggles.

A prototype was tested in a trench dug in the University grounds. The Minister for Defense approved the University’s plan to commission 10,000 masks for Empire troops.

The respirator formed part of Melbourne scientists’ work not only to contribute to the war effort, but to boost Australian scientific and technical development.