Researchers give breath of life to critically ill children in developing countries. 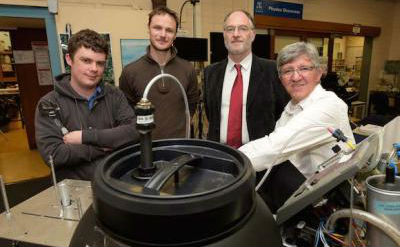 This article originally appeared in the Newsroom on 10 June.

A team of University of Melbourne physicists and doctors are developing life-saving oxygen supply machines that continue working even during power cuts, to treat young children with pneumonia in developing countries.

The team has received $100,000 from the Bill and Melinda Gates Foundation via its Grand Challenges Explorations Grants program to prototype new technology, with a chance to receive a further $1 million once it is proven.

The machine, known as LPOS, stores oxygen at low-pressure to ensure steady supply when the electricity fails. It has potential to reduce child pneumonia mortality rates in developing country health facilities by 30 per cent. The team will test it in medical clinics in Uganda in August.

Pneumonia is the number one killer of children under five-years-old worldwide, causing 1.5 million child deaths a year. One child every 30 seconds. Even if a child suffering from severe pneumonia is on antibiotics, without a steady flow of purified oxygen, their lungs struggle to cope and the condition often becomes fatal.

"The air we breathe is 78 per cent nitrogen and 21 per cent oxygen. This machine removes the nitrogen from the air and increases the concentration of oxygen to 90 per cent."

The problem is, he says, when the electricity fails, as it often does in Sub-Saharan Africa, East Timor and Papua New Guinea, the flow of oxygen stops.

"We have developed a method of storing oxygen safely at a low pressure, which has the ability to maintain a flow of oxygen to a patient during a power outage," he said.

"We thought, why don't we capture the spare oxygen that's being made when the power is on and keep it in a low pressure storage system to tap in to when the power goes off? Now we have funding to build it and test how to store enough oxygen to get through a day without electricity."

The store would be enough to keep a child alive in excess of eight hours, even during a complete blackout, he added.

"We have a simple, yet profound key performance indicator and that is how many lives we save."

Associate Professor Jim Black from the Nossal Institute, who is also working on the project, worked in remote health clinics in Mozambique for a decade. He knows first-hand the devastation pneumonia has in these communities.

"If you diagnose that a child with severe pneumonia, and you don't have oxygen to treat it, that child will commonly die," he said.

"It's dreadful. It's one of the hardest things to deal with when you work in an African health service, particularly when you know just how easy it would be to solve these problems if you had the right resources."

Shipping in bottled oxygen, he says, is not practical due to the logistics and cost of distributing it to clinics. Instead, doctors use machines that use electricity to filter the nitrogen from the air, which are effective provided the power doesn't fail. That's why finding a way to store oxygen when the power fails is crucial.

"With a combination of antibiotics and highly concentrated oxygen, the immune system kicks in, and within only 24 to 48 hours, the child can clear out their lungs and wean off the oxygen."

"With this technology, we can make big inroads against the mortality rate. That's why we're so dedicated to making this work. We can start talking in terms of tens of thousands of deaths that can be prevented."

This August, the team will travel to Uganda to test the technology in medical clinics in East Africa while recording data, understanding the local issues with power supply and establishing relationships on the ground.

The ultimate aim is to establish a startup in Melbourne with strategic partnerships between the University, industry and community, to form the manufacturing capability here in Australia.