In his speech, Dr Dut shared the story of his journey from attending lessons under a tree in a Kenyan Refugee Camp, to becoming a surgical registrar at the Alfred Hospital.

Dr Dut was awarded a Western Chances Scholarship in 2006. During his medical degree he also received both a residential scholarship—the VMIAL-PSA Medical and Dental Scholarship—and the John Manson Scholarship with which he travelled to India to gain first-hand experience of global health challenges.

He is now studying a Master of Global Health at Harvard University after being awarded the 2017 Roth/Segal John Monash Scholarship. 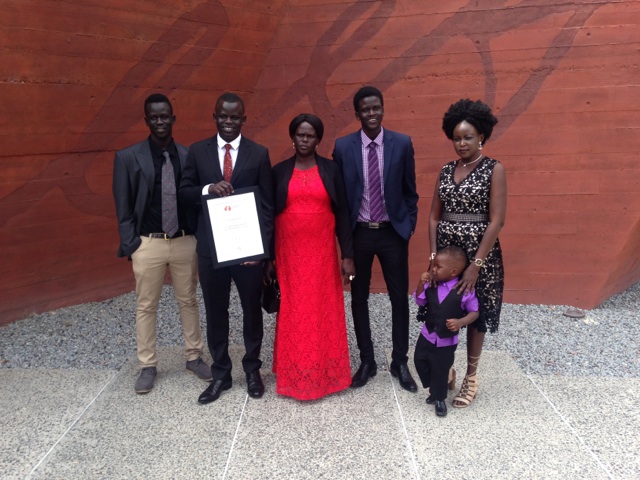 The speech, which Garang delivered without notes, is transcribed in full below.

I am glad to be here today, at the Good Business Forum to support Western Chances. As you heard my name is Garang Dut. I was not born in Australia.

So, as we continue to have the last bit of our lunches, I would like to reflect on the fact that we have clean drinking water on our tables. Where I was born and grew up, there was not such privilege. I know in most cases that a lot of things around us we are used to, that we tend not to think of as privileges because they are so common and around us.

When I arrived in Melbourne in July of 2005, I saw a sea of lights. There was so much light you could not see the extent of where Melbourne ends, as the plane landed at Tullamarine Airport. Having just arrived in Australia, after an extended life in refugee camps, most of it in Kakuma refugee camp in Kenya, where I spent 12 years.

But right now I am in a position where I am contributing back to the community in the same manner that Western Chances is doing.

I am a doctor, a surgical registrar at the Alfred Hospital. The environment that I grew up in inspired me to want to do something about it. There were preventable diseases everywhere. There was clear evidence of the impact of poverty and what can happen, not necessarily if you do not have the right resources but also things such as the rule of law, the functioning business that keeps society going, teachers that nurture the young minds to be future leaders when the system is not functioning, and so from my perspective I saw that I want to contribute, to remediate the impact of diseases within the society.

I chose to be a doctor but there was no realistic capabilities in place. The nearest medical school in Kenya was thousands of kilometres away in Nairobi while the refugee camp is at the border of South Sudan, the current state of South Sudan and Kenya, which is far north. But after having started my schooling pretty much under trees in open ground, writing in dirt, not enough stationery, I had the determination because I had the will to want to change what was around me.

I pursued my interests but with no real opportunities available up until I arrived in Australia. I had just finished year 10 at the time so I came into Australia and launched in VCE at Sunshine College.There were challenges to do with transition into new society, getting used to my new environment as well as taking on VCE. The challenges entailed in taking on VCE required that you have the necessary equipment such as books, calculators to take on subjects such as Mathematical Methods and Specialist Mathematics, being acquainted to computers. I did not have those things as I arrived in Australia and was new. It was Western Chances that gave me a hand up that first time. My first scholarship was from Western Chances where I got a computer, got access to internet, was able to use it at home, got a bicycle as well because I walked to school the whole time.

I did well in Sunshine College in VCE, got recognised as a Kwong Lee Dow Scholar by The University of Melbourne but at that time, it was when Melbourne University was transitioning into the new Melbourne Model, so I went on and studied Biomedicine but at Monash University. That involved a lot of commuting across Melbourne. For those that know where Sunshine is, all the way in the west of Melbourne but studying in Clayton at Monash University that is not a simple deal. I had to wake up early morning to attend 8 o’clock classes for microbiology, practicals, anatomy classes and most challenging of all biostatistics because that required specific software that was not available to me and I had to commute even on weekends to go and access the computers at Monash University.

It was still my determination to want to change the environment around me compelled me to go through all those challenges and want to succeed. It was again Western Chances which gave me a travelling ticket. There was no Myki in those days. There were three zones of transport through which you have to get individual tickets if you did not get the complete one. With social security income of $192 a fortnight that you had to use to pay rent, pay bills as well as transport which was $58 if I can remember, a week for three zones at the time. Western Chances catered for that and facilitated the opportunity for me to exert myself and not having to worry about where I should get the transport to get to Monash University. With that facilitation of my travelling I was able to do the rest by spending time at the university, studying hard, committing myself and subsequently going on to study medicine at The University of Melbourne.

After transitioning to The University of Melbourne I was fortunate to get another scholarship, a residential one to Ormond College which did not only provide the convenience of travelling to classes, walking to neighbouring hospitals such as the Royal Melbourne Hospital where I trained but also a new network of committed students, socialising within the environment of Ormond College and the neighbouring colleges. It also enriched my experience in being able to explore other interests, going in-depth into studying social justice as an extra-curricular endeavour.

I feel that, that first opportunity that I got through Western Chances potentiated my capacity to take on what was in front of me. I believe that there are so many other young people that are talented who, if not given the opportunity, would not really achieve what they want. It is very much better for the greater good that what we do, we do it in our own ways, whether it is contributing to organisations such as Western Chances that go to the full length of what each of us has, the outcome of your contribution would be able to give back to the society.

I am happy that every morning when I wake up, I might be sleepy, I might have had two hours or three hours sleep but I am inspired more by the fact that at the end of the day, when I come home I might have contributed something, to someone, and helped change someone’s life. Whether it is someone who has presented at the Alfred Hospital in a trauma, which is quite common (the Alfred Hospital being the main trauma centre), I will have contributed to the process of reversing that. Someone at the brink of the end of their life and being able to reverse. That was inspired by my environment but made possible by the various people like yourselves who have contributed to the good work that is done by Western Chances.

As we all know western Melbourne has a great number of young people that would really benefit from such opportunities and within myself, I challenge myself to do more than be a doctor and I am very engaged with my community, still live out west of Melbourne where I can keep mentoring young people.

I would like to conclude my speech today with a quote from one of the most prominent Australian Sir John Monash who once said “adopt as your fundamental creed that you will equip yourself for life not solely for your own benefit but for the benefit of the whole community”.

I am glad to also let you know that, through my endeavours of wanting to change things such as preventative diseases, I have been interested the whole time in public health as well, and this year I have been a fortunate recipient of the John Monash Scholarship to be able to go and complete that endeavour at Harvard University this year.

The work that each of you does to support philanthropy is what goes a long way in the long run and as a John Monash scholar I would like to aspire and continue to do the work that John Monash would have loved each of us to do for the society – to aspire to equip ourselves for life, to be able to contribute productively.

But of course, for each of us to really complete that aspiration, there needs to be the capacity to do so and it is what you are all here today to – to appreciate the organisations that support people to be able to aspire to be productive members of society.

I would like to encourage you all – there are so many other young people out there that would eventually become doctors, lawyers, business leaders, teachers and public health leaders. So, if you are inspired today by how I have transitioned through, I would like you to support the work of Western Chances.

Thank you and I would like to meet you.