Catherine knew she was made for a medical career while she was studying at school in Albury. 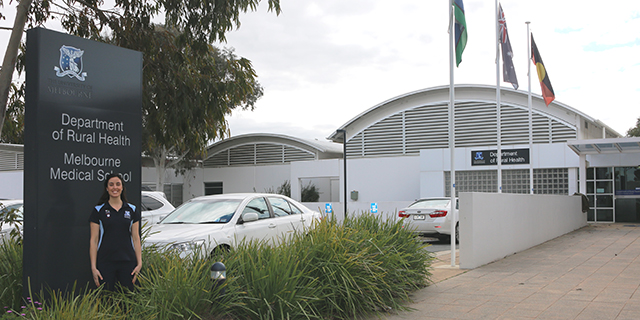 Comfortable in the country

Catherine Mannering knew she was made for a medical career while she was studying at Xavier High School in Albury. During Year 11 she had the opportunity to do work experience at Albury Base Hospital and spent time in the fracture clinic.

“During that time, I was able to follow the doctors and nurses and specialists around. In the fracture clinic, I took out pins from patients’ hands and I enjoyed every minute of my time in the hospital. I wanted to do medicine and to become a GP from that moment,” says Catherine, 24.

But now in her second year, Catherine has been quick to return to regional Victoria – which is where she feels most comfortable. She is part of the university’s Extended Rural Cohort stream that provides rural training for students interested in practising medicine in a rural or regional location.

Catherine is in Shepparton this year and will study in Yarrawonga next year.

“I don’t love the city and I wanted to be in an area where I felt comfortable. I have family friends and mentors who are doctors in small communities in rural NSW and I’ve seen how much they love living and working in their community and I want that,” says Catherine.

“They move around their community with a lot of ease and know their patients from a personal perspective. They also share a similar way of life – one of my mentors runs a farm and so he has a real connection with his patients who are farmers.”

Catherine quickly settled in to Shepparton and is a familiar face at farmers markets, local cafes and exercising around the lake. She’s part of a local netball team and has made new friends at the gym. But it’s the medical experience she is gaining in rural and regional Victoria that has confirmed to Catherine that she’s chosen the right career.

“I did a GP placement as part of my ambulatory care rotation and during those four days I sat in with a GP mentor. I was also able to chat to a patient first and to do a quick history and examination and then hand over to the GP mentor. That was a very useful experience,” says Catherine.

“Once I graduate I would like an internship or residency in Shepparton or Wangaratta or in regional NSW. The lifestyle suits me and I like the idea of being able to help people with their health over the course of their lifetime.”