The Alumni Hour series provides an in-depth look into some of the Faculty's most extraordinary and accomplished Alumni. Join us and renowned ABC presenter Angela Lavoipierre for conversations that will inspire the next generation of health care professionals. 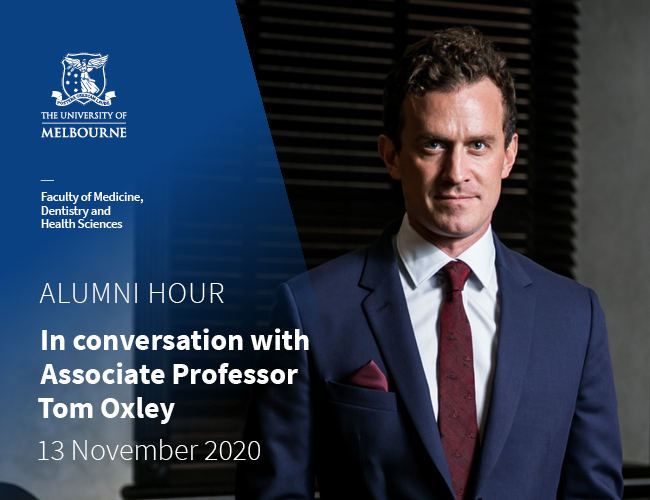 He is the founding CEO of Synchron, Director of Innovation Strategy in the Department of Neurosurgery, Mount Sinai Hospital, New York and was key in establishing the Vascular Bionics laboratory at the University of Melbourne, which he currently co-leads with Associate Professor Nick Opie.

During his PhD, Tom worked on preclinical model of the Stentrode, a fully implantable medical device that can translate brain signals from the inside of a blood vessel without the need for open-brain surgery. This pioneering ‘thought-controlled movement’ technology will revolutionise how we treat a number of previously untreatable nervous system conditions, including the ability to help paralysed patients restore functional independence, or improve the quality of life for those suffering from Parkinson’s Disease.

Tom became fascinated with the brain around the age of 12, initially pursuing psychiatry before entering into the world of medicine and completing his PhD in neuroscience at the University of Melbourne.

Join us for an exclusive insight into the latest in neuroscience technologies, learn about Tom’s extraordinary career and journey to become the Director of Innovation at one of the world leading hospitals and how his time and networks at the University of Melbourne contributed to his vision of the future.