Mrs Nancye Best studied Physiotherapy (then, Massage) during World War II and is now a donor to scholarships for students of Physiotherapy at the University. 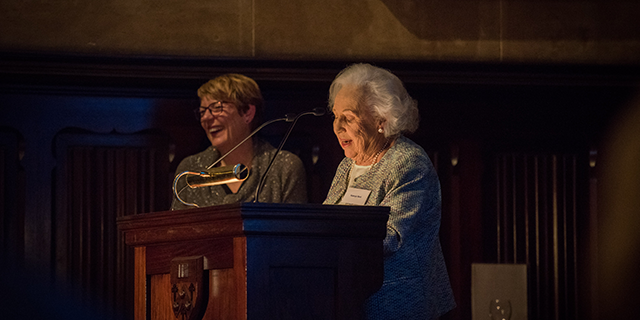 “We practiced our medical electricity in wire cases because it was wartime and they thought the electricity would interfere with the aircrafts and messages going to them. It was thought that putting the electricity machine on joints would give relief to our patients.

“We travelled by tram as there was no petrol for cars in wartime. They were pretty full days with a lot of tram travelling.” Mrs Best graduated at the end of 1944 with a Diploma in Massage.

“Our diplomas were presented at the annual meeting of the Australian Physiotherapy Association (APA). If you were not 21 you had to hand your diploma back and it was posted to you on your 21st birthday, as you couldn’t be registered until then!”

There are many standout moments from Mrs Best’s time at the University.

Mrs Best entered the workforce as a physiotherapist and was on-staff at the Royal Melbourne Hospital the day peace was declared. Of course, everyone got to go home early that day! She left work to raise her family and help in her husband’s home-based medical practice. Later, she completed further training and returned to practicing physiotherapy.

Mrs Best is a proud wife and a mother of six, with son Jim Best the former Head of the Melbourne Medical School at the University of Melbourne. Through him, Mrs Best has maintained a close relationship with the University.

With this in mind, Mrs Best decided to establish a scholarship to support young physiotherapy students to complete their studies.

“There are so many wonderful young people who are putting physiotherapy as their first preference. Bright and determined, they really shouldn’t be stopped by money. I hope I can be that helping hand that gets them there.”