An Australia and New Zealand Melanoma Trials Group (ANZMTG) clinical trial led by Peter MacCallum Cancer Centre investigators, in collaboration with the University of Melbourne Centre for Cancer Research, that aims to develop a novel treatment combination for a rare neuroendocrine cancer has received $AU1.8m funding from the Medical Research Future Fund. 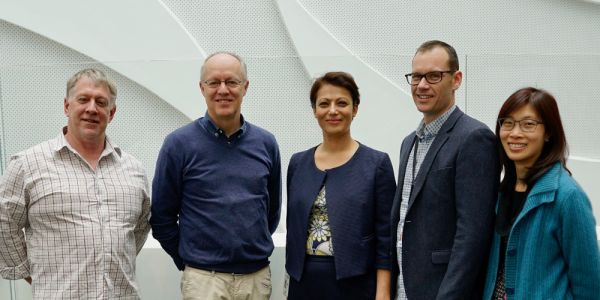 The clinical will involve patients with Merkel Cell Carcinoma (MCC) and will test the immunotherapy drug Avelumab in combination with either radionuclide therapy or external beam radiotherapy.

The trial will be headed by Dr Shahneen Sandhu, an Honorary of the University of Melbourne Sir Peter MacCallum Department of Oncology. Dr Richard Tothill of the University of Melbourne Centre for Cancer Research and Department of Clinical Pathology is also named as a chief investigator on the grant and will work on the translational aims of the trial involving biomarker analysis.

The clinical trial builds on research into MCC by Dr Tothill and radionuclide expertise by Professor Rod Hicks at Peter Mac. Dr Tothill's groundbreaking research describes the unique genomic landscape of the disease.

"Our research has shown that most Merkel Cell Carcinomas diagnosed in Australia are quite genetically distinct from those arising most commonly in other parts of the world. This will likely have implications for future treatment and will therefore be assessed in relation to drug response as part of the MRFF funded trial," says Dr Tothill.

Around 70% of MCC patients have a form of the cancer that is suitable for radionuclide therapy – an infused treatment which delivers radiation directly to tumours which express a certain target peptide.

Other patients will receive external beam radiotherapy, and Dr Sandhu says there is a strong rationale that either approach could amplify the effect of immunotherapy.

“MCC is highly responsive to radiotherapy and radiation has been shown to enhance the anti-tumour effects of immunotherapy,” says Dr Sandhu.

Around 300 Australians are diagnosed with MCC every year, a number which is steadily growing. Australia reports the highest incidence of MCC in the world although it is still considered a rare disease compared to other skin cancers such as melanoma.

The cancer has a five-year survival rate of only 18% once it spreads from the skin to another site. It’s the propensity for MCC to spread that makes it the most lethal form of skin cancer.

The similarity of MCC tumour cells to specialised Merkel cells – which are responsible for the sensation of light touch - gives the disease its name although much remains unknown of its underlying biology. MCC is thought to be caused by either a virus or excessive sun-exposure, with the sun-related form of the disease arising most commonly in Australians, characterised by hundreds of gene mutations caused by ultraviolet light DNA damage.

The funding was announced recently by Federal Health Minister Greg Hunt, as part of a broader $10 million MRFF allocation focused on clinical trials in rare cancers with low survival rates.

“Put simply this funding is about saving and extending lives.  It delivers hope for a longer and better life,” Minister Hunt said in a statement.

The GoTHAM trial is an adaptive, biomarker-driven, signal-seeking, three-arm clinical trial designed to develop the novel combination of avelumab, with either 177Lu-DOTATATE radionuclide therapy or radiation therapy (RT) in metastatic MCC, depending on the expression of somatostatin receptors as defined by 68GaTate-PET scans. The project will develop the first-ever anti-PD-L1 – peptide receptor radionuclide therapy (PRRT) / RT combination for metastatic MCC, as well as provide new insights into predictors of response and drug resistance via the embedded translational studies.