From the discovery of germs to the invention of the bionic ear, we have been at the centre of medical life in Australia for almost 150 years. The School of Medicine was founded in 1862, in the face of strong opposition and without its first Professor, George Halford, who did not arrive until the following year. Although armed with impeccable testimonials, for many years he had to make do with inadequate conditions, teaching few students, indeed he conducted the first dissection in the back shed of his Carlton home in 1863. From these humble beginnings, by Federation in 1901, we had become the Faculty of Medicine and were well on the way to dominating health and medicine in Victoria, also training many Western Australians, Queenslanders and Tasmanians in this period.

Along with educating the doctors of the nation, we were a leading institution in Australian intellectual and public life throughout the twentieth century. The Medical School's foundation had coincided with the biomedical revolution in Western medicine and we have played an important part in the innovations and research, both in the laboratory and the clinic.

In 1989 we began the expansion into other areas of health science practice and research which has made us the largest educational institution for health professionals in Australia, when the university's Faculty of Dental Science amalgamated with Medicine to become the Faculty of Medicine and Dentistry. This expansion continued with the inclusion of Physiotherapy, Psychology and Nursing. 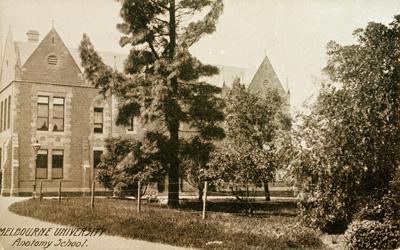 In 2001 we established Australia's first School of Population Health, a landmark in the development of inter-collegiate study and research, and the following year, the School of Rural Health, a strategy aimed at addressing the crisis in rural health throughout the nation.

The most recent additions to our stable of expertise are Social Work and Global Health and Psychological Sciences. Social Work moved from the Faculty of Arts and the Nossal Institute for Global Health was established to build on the programs and resources of the Australian International Health Institute.

As a leader in innovation, we have also attracted a large number of world class research institutions to our immediate vicinity, thus making the Parkville biomedical precinct known across the globe - all beginning with one Professor and three students.