The Art of Healing: Australian Indigenous Bush Medicine, was a major exhibition at the University’s Medical History Museum in 2018. In 2019-2020 the exhibition is travelling to King's College London and the Museum of Medical History, Charité–Universitätsmedizin Berlin. It explores the enduring presence and evolution of Indigenous medicine and presents, through contemporary art, examples from many communities. 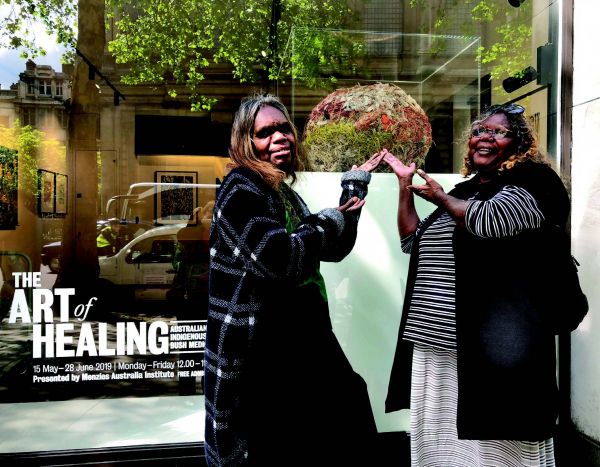 L to R: Rene Kulitja and Pantjiti Imitjala Lewis are Ngangkaṟi (traditional healers) from Ngaanyatjarra Pitjantjatjara Yankunytjatjara Women’s Council in Alice Springs and traditional owners of Uluru. They traveled to London in 2019 to launch the exhibition at King's College. Pictured here with a work by Ilawanti Ungkutjuru Ken, Tjupurrula wilitja: bird nest basket, 2017.

The exhibition showcases traditional healing as a thriving practice informed by the past, and an intrinsic part of the lives of many Indigenous people.

“The rich knowledge of bush medicine and healing practice is part of the past, present and future – it’s part of a continuum,” says Dr Healy.

“The vision of this exhibition is to show the extraordinary diversity of Australian Indigenous culture."

Artists include Gija Elder Shirley Purdie, who has researched and illustrated the bush medicine of her region near Warmun in the Kimberley. A major triptych from Victorian Aboriginal artist Treahna Hamm that shows ancestral Yorta Yorta women collecting bush medicine along the bank of dhungala (the Murray River), was also featured.

Kathrine Clarke, an artist who previously worked for the University’s Student Success Team, created a series of five paintings that show various plants used for bush medicine in Victoria.

Judith Inkamala from Hermannsburg in Central Australia was commissioned to create a bush medicine pot that depicts a scene revealing how bush medicines are prepared.

Other artworks exemplified traditional Indigenous remedies. In the Kimberley, the bark of the blood wood tree is boiled and drunk as a tonic to help cure cancer, and tablets made of mud from the dried mud flats on Sturt River, an area called Luga, are chewed to help treat an upset stomach.

Tiwi Islands artist Irene Mungatopi’s etching revealed how green plums are used to treat toothache. The power of the Maparns Ngankaṟi – traditional men and women healers – are represented through artworks such as paintings of country and baskets.

“The display of artworks and objects opens a window on to the precious legacy of Aboriginal healing traditions, with their unique values, beauty and power. Images are used by healers to focus the patient’s attention on ancestral power and the proper state of balance between the spiritual and the mundane, to achieve social order. Displaying art depicting the design world and ways of seeing traditional healers validates these ancient traditions and shows us creative ways to maintain these vulnerable and threatened bodies of knowledge and practice,” says Professor Marcia Langton AM, Associate Provost.

Professor Langton spoke in depth about bush medicine and traditional healing practices in her Dean’s Lecture, ‘The Power of the Ngangkaṟi’, scheduled to coincided with 2018 NAIDOC Week. Professor Langton, who is patron of the Alice Spring’s based community organisation Ngaanyatjarra Pitjantjatjara Yankunytjatjara Women’s Council (NPYWC) was joined on stage for a Q&A session by Ngangkaṟi Maringka Burton, Tinpulya Mervyn and Betty Muffler, and Angela Lynch, Manager of the Ngangkaṟi Program, all from the NPYWC.